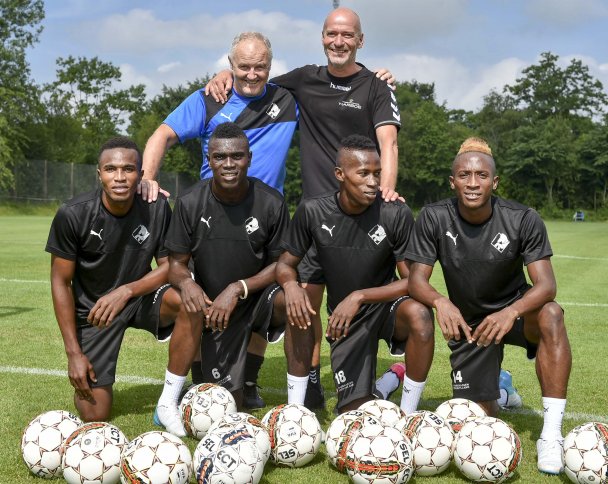 The Danish top flight side based in Randers was founded on 1 January 2003.

All four in Denmark with a single burning desire over a three weeks period, that is to impress the Randers Sports Manager Ole Nielsen and Head Coach Olafur Kristjansson in their bid to secure permanent deals.

Although it is difficult to judge much from Friday’s four-man training, Football Sierra Leone understands Peter Elstrup is well satisfied with what he has seen so far.

“It has been beyond my expectations. They are athletic and talented, and so they seem to learn quickly. But one thing is a short training as today; something else is playing 11 against 11. That’s when they really should show themselves, “says talent manager.

“Football is about being able to handle the pressure. It’s part of the game, and we are ready to prove that we can handle it, “says Christian Moses before training is connected with a jogging tour around the track on Thursday.

“We must just work hard and show what we can give on the pitch, “says Yeami Dunia, who has played nine international matches for Sierra Leone in various positions.

Christian Moses concurred “Yes, we believe we can make it here, hard work and determination.”

FC Lion Pride’s Team Manager; Mamadou Bah, who is also in Denmark told amtsavisen.dk,”I hope they all going to do well here in Randers, where track conditions are quite different from back home in Sierra Leone.

“All four are very good player, who have prepared well, and two of them were in the starting line-up on the national team, who recently beat Sudan 1-0 in the African Cup of nations qualifier in Freetown June 4, 2016.”