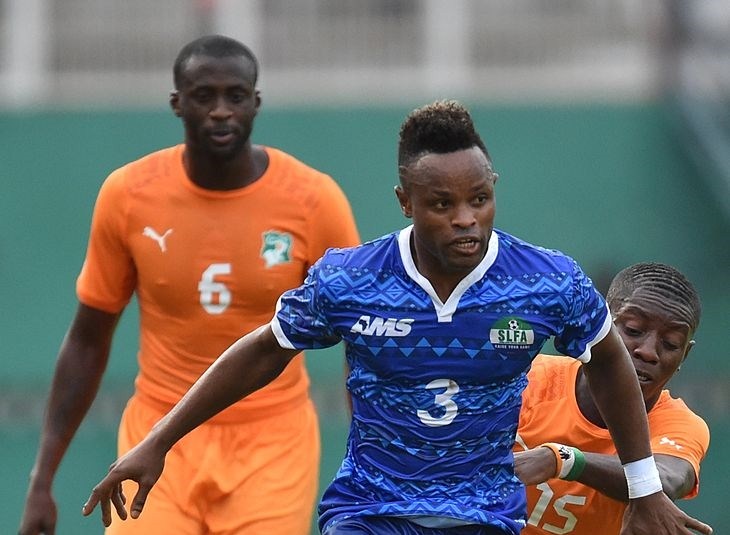 Suma, 29, who won over 30 caps for Sierra Leone, said he wants to concentrate on his club career and making way for the younger prospects.

“After carefully considering my situation, I have officially decided that it is right to give a chance to the younger players.

“And I think the time is right to retire from international football.

“I thank God for bringing me this far,” he told footballsierraleone.net

Suma was heavily involved in the Sierra Leone squad during the 2015 African Cup of Nations qualifiers in which the country struggled to win a single game.

His last game for Sierra Leone was in the 2018 World Cup qualifiers against Chad in Nigeria Adokiye Amiesimaka Stadium (Port Harcourt) – Sierra Leone won 2-1 but was eliminated from the preliminaries 13 October 2015.

He was the captain in DRC Congo and Ivory Coast during the AFCON 2015 qualifiers, in both matches the country was heavily defeated 3-1 and 5-1 respectively.

He started his professional career with Åtvidabergs FF in 2005 where he made 49 appearances scoring seven goals.

In 2001, Suma, who was widely considered as one of the best Sierra Leonean youth footballers while in the Gambia he went on to amass over 170 career appearances playing for 10 foreign clubs.

In 2003, he was omitted from the Sierra Leone final squad for the 2003 African U-17 Championship in Swaziland, something he describes as the worst moment of his life.

In the championship, Sierra Leone placed second, behind Cameroon, thereby qualifying for the 2003 FIFA U-17 World Championship in Finland.

He was fortunate and was called back to the squad for the tenth edition of the U-17 world championship in Finland.

He is presently in the United States where he is considering ending his playing career.