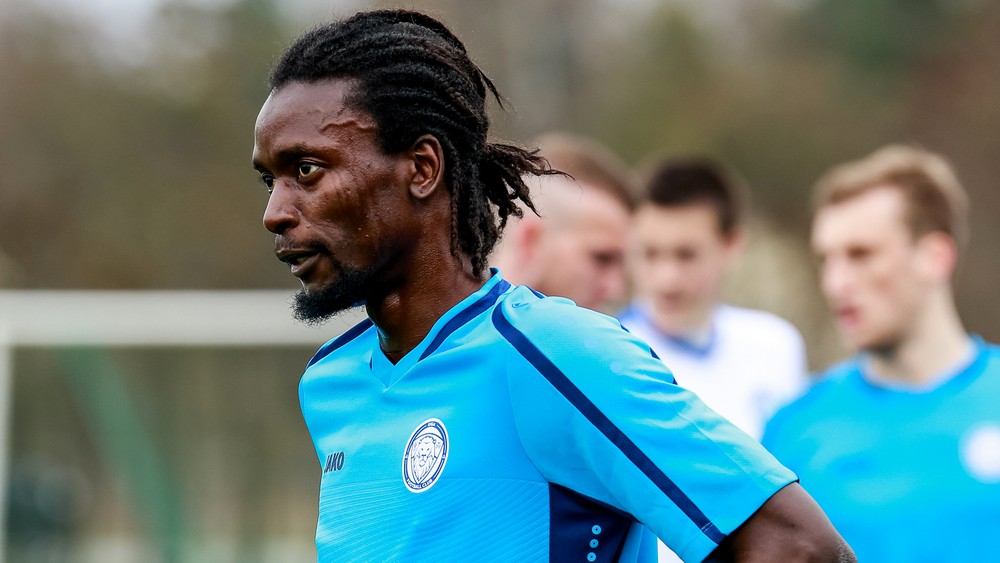 John Kamara pictured is out of Leone Stars 18-man squad

Sierra Leone and Riga FC midfielder, John Kamara has been dropped out of the Leone Stars 18-man squad for today’s crucial 2017 AFCON qualifiers against The Elephants of Ivory Coast in Bouake.

The Riga midfielder was among the 16 Foreign Based Players invited by head coach, Sellas Tetteh.

Speaking to Sports Journalists at the Elephant’s Hotel in Buoake, the 2014 Sierra Leone Player of the year said he was called outside by Assistant Coach John Keister including five Home Based Players, informing them that they would not be part of the 18 man squad.

He said Coach Sellas Tetteh as a professional gaffer should have been the best person to talk to him about such decision not his assistant.

“I John Bankole’ was not treated as a professional,” the disappointed midfielder said and accused the coaches of the national team coaches of running football ‘as a business without any focus’.

“I have played all my games and continue to be a regular player for my team and I have been part of this team for over four years now. I don’t think I should be left out of this squad for home-based players because there has been no league in Sierra Leone since the outbreak of the Ebola Disease in 2014,” he said.

The Latvian based midfielder said the attitudes of coaches in Sierra Leone have led to the poor state of football in the country.

“I decide to come public because I wanted Sierra Leoneans to know what I have been going through as a player,” adding that he might not get any further call-up to the team by the Sierra Leone Football Association.

On the decision to omit Kamara from the final 18-man squad, Coach Sellas Tetteh said the Latvia based player was left out of the squad due to the number of Foreign-based midfielders they had, adding that Mohamed Medo Kamara and Khalifa Jabbie are the best options due to the importance of the match and his game plan.

The Ghanian tactician said there is no home-based midfielder in the team who has played in Kamara’s role since 2014.

Hr also refuted the players claim that they have been running football in Sierra Leone as a business.

“I sent Keister to convey the message to Kamara because we are working together as a technical team and that shouldn’t have been a problem concern” Coach Tetteh adding that the midfielder has been very pivotal player for his club but has to compete with other midfielder in the national team.

Coach Tetteh said the behaviour of John was unacceptable and didn’t really know why he went that far.

“He’s frustrated and wanted to destroy the peace here”, he said adding that such display by the player will not affect his game plan as the boys are focused and well prepared to face the Ivorians.

The match will be played at the Peace Stadium in Buoake at 6pm prompt.

Credit – SWASAL
Supported by – The Ministry of Sports