Fifa backs Isha Johansen over use of funds

SLFA president Isha Johansen, who was detained and questioned, is under investigation by Sierra Leone’s Anti-Corruption Commission (ACC) over the management of funds received by the SLFA since February.

The world football body, Fifa has said in a letter to the Sierra Leone Football Association (SLFA) that there has been no ‘misuse of the funds’ it has given to the Isha Johansen’s administration.

A FIFA statement said: “Fifa has no reason to suspect there has been misuse of funds that Fifa has provided to the SLFA.”

Fifa also warned of any government interference in the FA’s business. 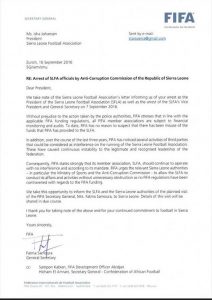 “In addition, over the course of the last three years, Fifa has noticed several activities of third parties that could be considered as interference (in) the running of the SLFA.”

“These have caused continuous instability to the legitimate and recognised leadership of the federation,” the Fifa letter, which was copied to the Confederation of African Football (CAF), added.

“Fifa urges the relevant Sierra Leone authorities – in particular the Ministry of Sports and the Anti-Corruption Commission – to allow the SLFA to conduct its affairs and activities without unnecessary obstruction as no Fifa regulations have been contravened with regards to the Fifa funding.”

Johansen, who alongside her vice president and Secretary general Chris Kamara spent a night in detention, a few days ago written a heartfelt statement declared herself innocent of any alleged corruption accusation against her and was ‘shocked and humiliated’ following her arrest.

Ady Macauley, head of the ACC, who confirmed that he ordered the arrests of the FA boss Isha Johansen, vice president Brima Kamara and secretary general Christopher Kamara have insisted that they remain committed to the fight against corruption in the country.

Meanwhile, Fifa also stated that it intends to send newly appointed secretary general Fatma Samoura to Freetown in due course to assess the matter.