FUS will play a friendly match against their Algerian counterpart CR Belouizdad on Tuesday, January 24, 2017, at 15:00 as part of their preparation for the return phase of Botola Maroc Telecom and the preliminary round of the African Champions League.

This test match is slated for the Fath Union Sports Academy and will be on camera, Football Sierra Leone understands.

Sierra Leone 2016 FA Cup Champions, FC Johansen, will face the Moroccans in the 2017 doubleheader in CAF Champions League preliminary round. 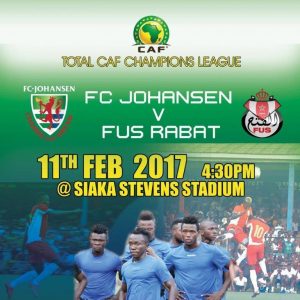 The club owned by the President of Sierra Leone Football Association (SLFA) Isha Johansen will host the first leg on the 11th February 2017 and the return tie the following week.

The preliminary round will feature a total of 46 teams and if Johansen’s side eliminates the Moroccans, they will play either side – the Ghanaian champions Wa All Stars or the Libyan outfit Al Ahly Tripoli in March.

Meanwhile, CAF Champions League holders, Mamelodi Sundowns, will start their defense of their title against the winner of the matchup between KCCA Club (Uganda) and D.1e Agosto (Angola).