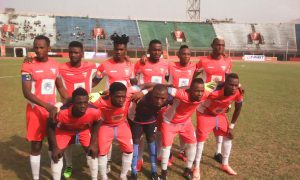 Hosts Johansen threw away an opportunity to record their first CAF Champion League home victory against Moroccan top flight side FUS Rabat, as they drew 1-1 in the first leg tie played at the Siaka Steven Stadium on Saturday.

The 2017 CAF Champions League debutants (FC Johansen) failed to hold on to an important lead in front of their home fans.

The kick-off witnessed no clear cut chances from either side in the early exchanges.

And after a dreadful first 45 minutes, Johansen took the lead immediately after the start of the second half.

The visitors were slightly dominant in the first half before Abdul Bangura headed home to give the home side the much-needed opener in the 50th minutes.

After the opener, the hosts was more pragmatic and never threaten to add to their tally against the Moroccans.

The Rabat-based club tried to rally for the equalizer few minutes after Johansen’s goal, but their efforts were derailed following some superb performances from the host defense.

However, FUS Rabat defender Mohamed Nahiri levels the scoreline at the Siaka Steven Stadium in the 75th min to give his side a massive away goal going into the return fixture at home.

At some points during the match, John Keister’s men showed glimpses of the threat they still possess with George Mata and Nyakeh Alpha causing some troubles to Rabat’s back four.

Many Johansen fans will be disappointed not to take a victory advantage into next week’s return leg.

The return fixture will be played at the Stade de FUS; in Rabat with the winner over two legs will play either side – the Ghanaian champions Wa All Stars or the Libyan outfit Al Ahly Tripoli in March.