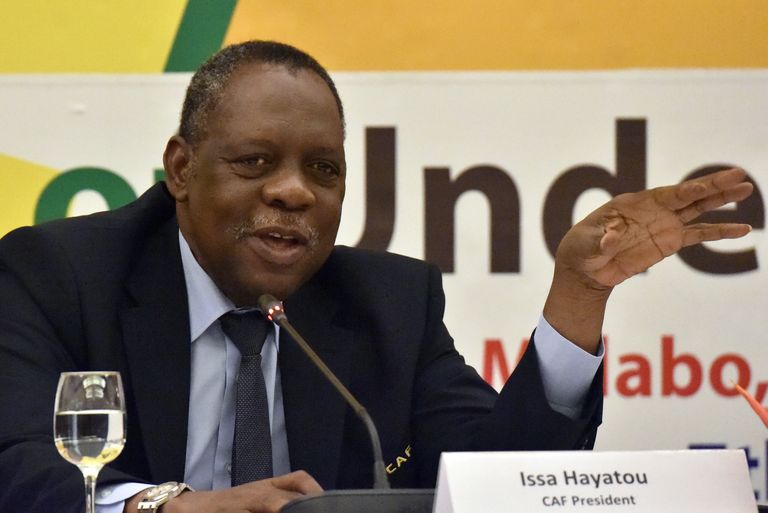 A lawyer representing both parties attended a hearing on Monday.

With Caf based in Cairo, Egyptian authorities maintain it is governed by local laws.

The African football body firmly rejects accusations it committed any wrongdoing when signing a multi-million dollar deal with sports agency Lagardere in June 2015.

“Caf categorically asserts that all claims against it are groundless and without merit,” a statement read.

“Caf will vigorously defend its position, its right and reputation using all legal means available under international law.”

The Egyptian Competition Authority (ECA) started to investigate the Lagardere deal in June 2016, prior to asserting – in January 2017 – that Caf had engaged in monopolistic practices that infringed local laws.

The deal gives Lagardere rights to a variety of African football competitions, including the flagship Africa Cup of Nations, from 2017 until 2028.

“As a result, the board voted in favour of (referring) Hayatou and El Amrani for criminal prosecution,” said the ECA in a statement dated 8 March.

Caf stresses that the allegations accusing it of selling rights without opening them for due tender are incorrect.

The organisation, which celebrates its 60th anniversary this week, maintains it did not sell any broadcasting rights to Lagardere – merely appointing the French company as its marketing and media agent instead.

Lagardere paid $1bn to Caf for the privilege and while it then undertakes responsibility for negotiating deals across the globe, “the rights remain vested at Caf” – says Caf Communications Director Junior Binyam.

The resurgence of the ECA’s interest comes at a critical time for Caf, which hosts its presidential elections on Thursday.

“The timing of the ECA’s media campaign underlines its attempt to disrupt and undermine Caf at the time of its presidential elections,” the Caf statement added.

“The referral of Caf’s president and its secretary general, in violation of all Caf’s constitutionally- and universally-protected rights of defence, only a few days before Caf’s presidential elections is meant to tarnish Hayatou’s image and exercise unfair external influence on the integrity of the whole electoral process,” added Binyam.

Hayatou is seeking an eighth term as he stands against his sole challenger, Ahmad, who goes by one name and who heads up Madagascar’s FA.

The African body also says it has not been given a chance to discuss the case with local authorities.

“In the ordinary course of any legal dispute under international norms, Caf would be given the opportunity to present its case to relevant authorities and have the right to be heard in accordance with due process,” says Caf.

“To date, the ECA and the Public Prosecutor, in quite remarkable and unprecedented fashion for regulatory bodies, have attempted to conduct a trial by media offering Caf no right of defence and serving it with no formal charges other than through the media.

“Indeed, the Public Prosecutor has referred its fait accompli case to the Egyptian Economic court following only a few days of investigations without any communication or engagement whatsoever with Caf.”

By contrast, ECA officials have often spoken to Egyptian media to air the organisation’s claims.