FC Zurich will be playing in the Swiss Super League next season after being crowned champions of the Swiss Challenge League.

The Challenge League champions thrashed FC Schaffhausen by four goals on Saturday and they will play their final league match at against FC  Wohlena on June 3, 2017.

Uli Forte’s side has been excellent all season winning twenty-five matches draw seven and lost six.

But with a game to spare, the capital club have nine-point lead more than closest challengers Neuchâtel Xamax.

Sierra Leone skipper Umaru Bangura has been a pivotal figure in the Zurich club automatic promotion back to the Swiss top flight.

Bangura, who is expected to skipper Sierra Leone in next month’s 2019 Africa Cup of Nations qualifier against the Harambee Stars of Kenya in Freetown on 10 June, made 17 appearances for the Zurich-based outfit since joining the club in August 2016.

The 12 times winners of the Swiss Super League are back where they belong and Bangura is delighted to be part of the Zurich side.

“Obviously delighted to be part of this great club,” Bangura told footballsierraleone.net. 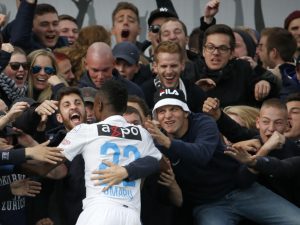 In March Bangura said: “FC Zurich is a big club and we all working very hard towards playing in the top flight next season.”

Last year Bangura underwent surgery twice on his left finger, however, since his recovery has contributed to the Zurich side promotion bid.

Bangura scored his first and only league goal in Zurich 5-0 thumping of Wohlen at the Niedermatten Stadium on Sunday 2 October 2016.

The Der Stadtclub, relegated last season finishing last, one point behind FC Lugano and was relegated to the Swiss Challenge League. Four days after the final game of the season they won the Swiss Cup 2016 beating FC Lugano 1:0.