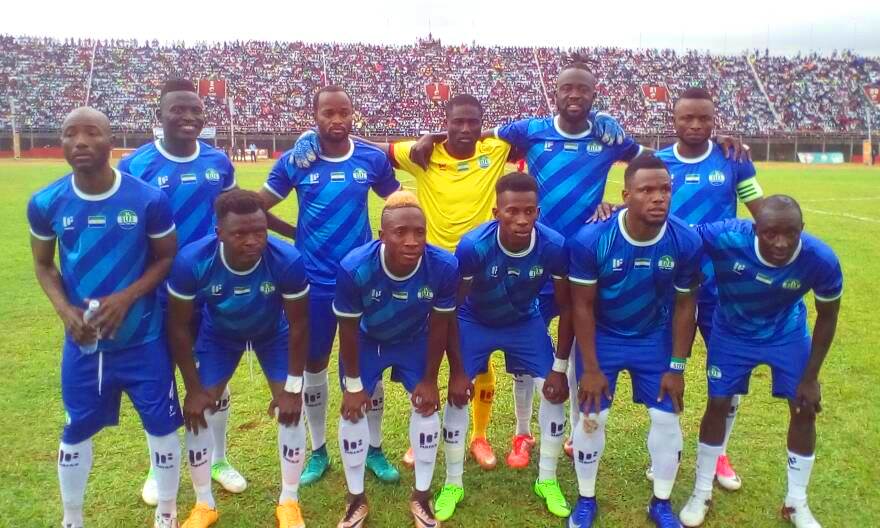 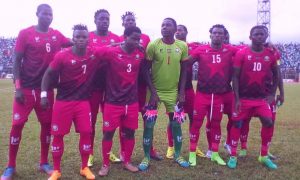 The Harambee Stars of Kenya XI

Sierra Leone beat Kenya 2-1 to give new coach John Keister his first win in charge of Leone Stars in the 2019 Africa Cup of Nations first leg qualifying tie in Freetown on Saturday.

The Leone Stars get off to a winning start at home at the Siaka Stevens Stadium. The victory sees Keister’s troops sitting at the top of the Group F with three points at least until tomorrow when Black Stars of Ghana host Ethiopia in Ghana.

Thanks to goals from Julius Wobay and Umaru Bangura in the 22′ and 69’ minutes respectively, with Kenya’s Michael Olunga getting their only goal in the 76th minutes despite playing with a man down.

Julius Wobay and Umaru Bangura penalty helped Sierra Leone make the all-important victory in their Group F campaign against the Kenyans who had Brian Mandela sent off for a dangerous tackle on Alhassan Kamara.

Julius Wobay gave the home side the lead 22 minutes as his shot past the Kenya goalkeeper Boniface Oluoch thanks to Kei Kamara whose breakaway on the left set up the cross for Wobay.

The visitors had a chance to draw back level just minutes after the goal from a Victor Wanyama glanced shot after Johanna free kick but the ball went off the crossbar.

In the 56th minute, Leone Stars came close to double their lead through Alhassan Kamara but he slipped while pulling the trigger from a cross from the right with the ball going wide.

Again in the 63rd minute, Alfred Sanko also slipped a shot on the upright from a Hassan Sesay cross but Leone Stars second of the evening came in the 70th minute from the penalty spot after Kei Kamara was brought down by Eric ‘Marcelo’ Ouma.

The Sierra Leone skipper Umaru Bangura stepped up roof the ball past Oluoch for his seventh goal for Sierra Leone.

Harambee Stars do showed some bit of fighting spirit with 15 minutes from the clock, thanks to a superb free-kick by Michael Olunga. Kenya’s next assignment will be next year March when they host Ghana in Nairobi while Sierra Leone will travel to Ethiopia.

The win over the Harambee Stars saw Leone Stars ended the East African 10 match unbeaten run which most came from friendly matches. It was also coach Stanley Okumbi third defeat since taking charge of the Stars early last year.

Ghana host Ethiopia in the other Group F match later on Sunday in Kumasi.