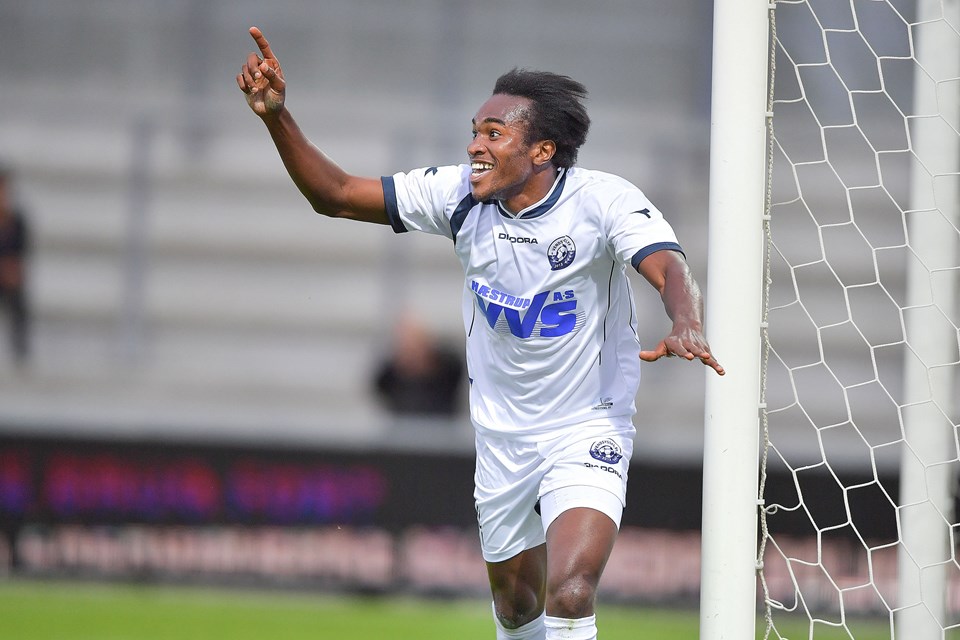 Christian Moses found the back of the net again for Vendsyssel in Monday’s night 1-2 defeat to Viborg at the Hjørring Stadion, Hjørring in the Danish NordicBet Liga.

The 24-year-old level things up three minutes after Mikkel Jespersen gave the visitors the lead in the 28th minute, but Pierre Dahlin Larsen ensured the victors walked away with maximum points before the break.

Monday’s strike was Moses’s second in five days as he scored his first goal of the season last Wednesday to help Vendsyssel secured 1-2 away win over Thisted and it was also the night Moses countrymen, Mamadu Khalil Jalloh made his debut since joining the club last month.

However, it was a sad debut day for Sierra Leone international striker in Sweden, Victor Mansaray, who was sent off just five minutes after his cameo for Umeå FC as they defeated Sollentuna 3-1 in the Swedish Norra, the third-tier league.

The former Seattle Sounders youngster, who was only granted work permit last week, was introduced in 58 minutes, replacing Mikael Wikström, but a hard tackle saw him received the matching order and in the Superettan, Mohamed ‘Poborsky’ Bangura returned from injury to help Dalkurd secured 2-1 win over Örgryte.

Bangura has been on the sideline for over three weeks due to trouble foot injury, but he was given a run-out in the 58 minutes after replacing Rashidi. Attacking midfielder, George Davies was the other Sierra Leonean, who made 58 minutes cameo for his side, St. Pölten who were beaten 2-1 on the road by Wolfsberger AC.

In England, Amadou Bakayoko rescued a point for Walsall after they were held to a 3-3 draw at home by Bradford City. Bakayoko’s strike came in the 87 minutes.

Down in the Non-league, Abdulai Bell-Baggie replaced Pettefer 14 minutes from time as his Poole Town were defeated 1-0 by Bath City. Former Sierra Leone captain, Ibrahim ‘Obreh’ Kargbo and his Dulwich Hamlet side were given a surprise as a dramatic 90th-minute equaliser helped Leiston salvaged a point in the Bostik Premier Division clash at Victory Road.

The midfielder, Hassan Sesay was in full-time service for Lahti as they went down 0-1 to PS Kemi at home while Abdul Sesay saw his JS Hercules also suffered a 4-2 defeat to Kufu 98 Mela.

Striker, Mustapha Bundu replaced Sana in AGF goalless draw against AAB in the Denmark top flight league but his countryman, John Kamara continued to keep his starting spot for Kaisar in their 1-1 draw with Ordabasy, while Michael Lahoud’s Miami walked away with a 0-2 away victory over Puerto Rico in the U.S second-tier league.

Elsewhere, Issa Kallon, Alfred Sankoh and Kei Kamara all see yellow cards over the weekend in Holland, Turkey and U.S. Major League. Kallon, who got his first start in the 2-0 defeat to De Graafschap was booked in the 26 minutes before substituted in the 76th minutes.

Sankoh, who was limited to 60 minutes of action as he received his second successive yellow in the 28 minutes in Denizlispor 2-2 draw with Eskişehirspor while Kei Kamara New England Revolution suffered 1-0 defeat to D.C United and the veteran Sierra Leonean striker was cautioned in the 65 minutes.