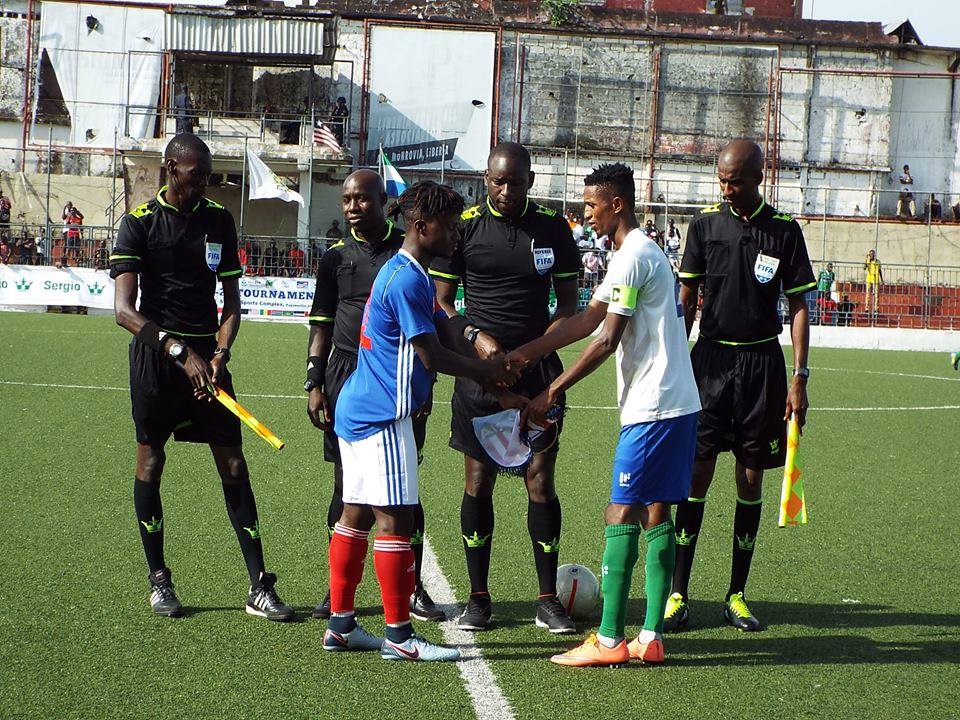 WAFU U20: Liberia and Sierra Leone U20 captains at the Antoinette Tubman Stadium in Monrovia.

Rampant Liberia hammered Sierra Leone 5-1 on Saturday, 28 April 2018, at the Antoinette Tubman Stadium in Monrovia to reach this year’s WAFU U20 semi-finals.

Christopher Wreh’s young Lone Stars will now play Mali on Wednesday, May 2 at the SKD complex in Liberia.

Liberia’s President George Manneh Weah was among the guests at the Antoinette Tubman Stadium and the local Stars were full of motivation.

Unconvincingly Sierra Leone conceded 10 goals against Guinea Bissau, the Ivory Coast and Liberia and scored 4 goals from their Group A matches.

Liberia, who suffered a 3-0 defeat to the young Elephant of Cote d’Ivoire in the opening match on Tuesday, 24 April 2018, in Monrovia, beat Guinea Bissau 2-1 late on Thursday and thrashed Sierra Leone as they impressively finished 2nd behind Ivory Coast.

Musa Kebbeh scored a hat-trick followed by goals from Sheku Sheriff and Chauncey Freeman put the icing on the cake in a game the young Lone Star side dominated.

Elsewhere, Ivory Coast impressively was again at their best thrashing Guinea Bissau 4-0 in the Group A final match at the SKD Sports Complex.