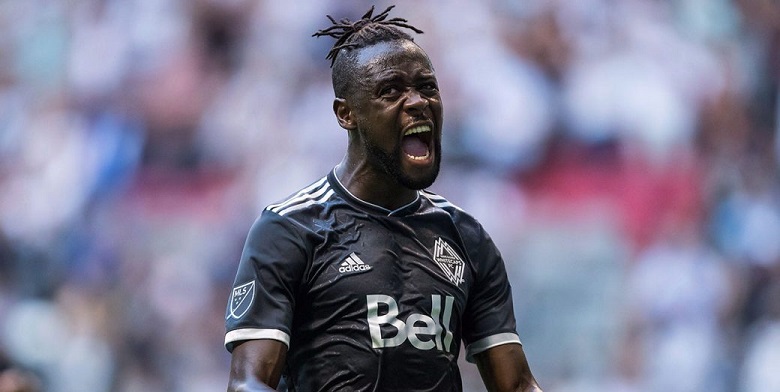 Kei Kamara was again on target for Vancouver Whitecaps, as they lost 2-1 against Seattle Sounders at BC Place on a rainy Saturday night.

The veteran attacker was also named Man of the Match following his outstanding display.

A record-breaking MLS crowd of 27,863 watched the Cascadia derby played with playoff intensity.

Kei Kamara’s 12th goal of the season was not enough as a brace from Raúl Ruidíaz gave Sounders maximum points.

Whitecaps will continue to fight to get above the playoff line with six matches remaining.

All goals were scored in the first half. The home team started well and nearly made it 1-0 early on when Kei Kamara’s knockdown found Nicolas Mezquida one-on-one with the keeper, but his shot went agonisingly wide.

The visitors’ Sounders opened the scoring in the 21st minute when Kelvin Leerdam and Cristian Roldan combined to set up Peruvian Raúl Ruidíaz.

Peruvian Raúl Ruidíaz doubles their lead in the 42nd minutes before Kei Kamara reduces the deficit with a header just before the break.

Kamara was part of the Sierra Leone side that was defeated 1nil in Ethiopia during 2019 Africa Cup of Nations qualifying match.

Tonight's #BudMOTM is @keikamara, who put in another solid effort and scored his team-leading 12th goal of the season. #VWFC pic.twitter.com/hThVfYPTv7

This was a big one.@KeiKamara scores his team-leading 12th goal of the season to get the 'Caps on the board.