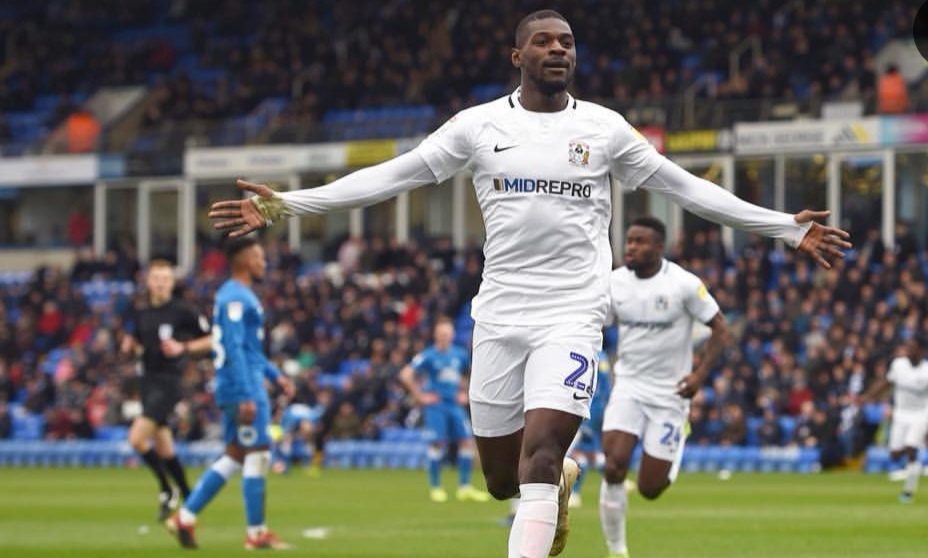 Amadou Bakayoko on target again for Coventry City against Peterborough on Saturday.

Amadou Bakayoko scored as Coventry City strengthened their grip on the League One play-off places with victory at fellow promotion chasers Peterborough.

Goals from Amadou Bakayoko and Bright Enobakhare either side of half-time made it three wins in four for the Sky Blues, who leapfrogged their opponents into seventh. After 38 games, Coventry are now just one point adrift of the top six.

A deflected long-range Louis Reed shot eight minutes into stoppage time at the end of the match was a consolation for Peterborough.

An entertaining game saw Coventry come close to taking the lead when Brandon Mason’s left-wing cross from 40 yards flew onto the crossbar.

Peterborough defender Ben White’s intercepted pass then allowed Luke Thomas to play in Bakayoko, who calmly finished from inside the area after 42 minutes.

White and Lafferty then failed to deal with a Lee Burge clearance, allowing Enobakhare to cushion home a close-range shot four minutes into the second half.

Posh goalkeeper Conor O’Malley endured a tough afternoon but made a terrific stop to tip a 25-yard free-kick from Liam Kelly onto the bar.

The visitors missed a number of other good chances but held on despite Reed’s late goal.

Connect with us on Twitter @football_sierra, on Facebook/Instagram Football Sierra Leone