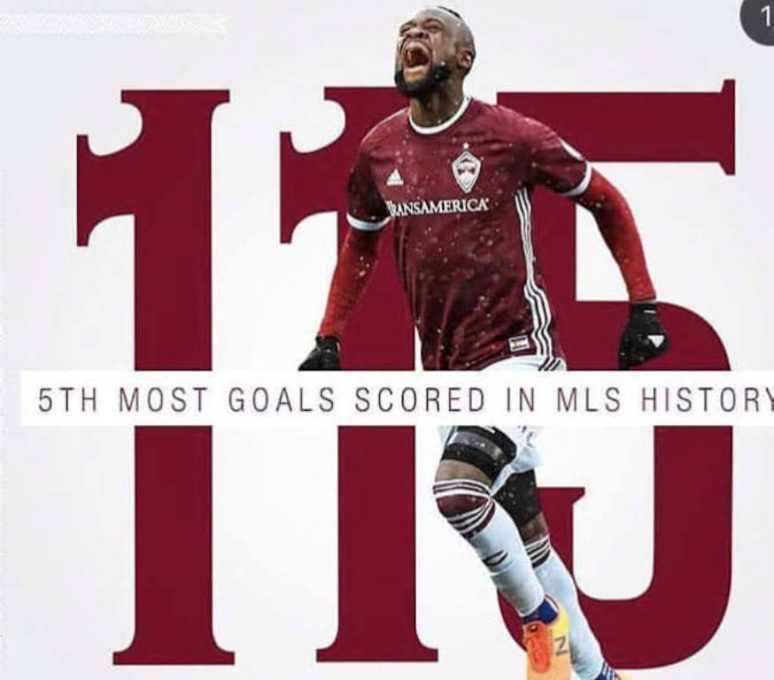 Kei Kamara’s goal against Orlando City in their 4-3 defeat has moved him ahead of Ante Razov in the exclusive Major League all-time top scorer list.

The Sierra Leone international was again on the score-sheet in their seven-goal thriller. Orlando needed to come from behind twice against the Rapids to win.

He accounted for his 115th goals in his MLS career after he capitalized on an Orlando mistake at the back to make it 1-0 in the 9th minute.

A huge 9th-minute opener pushed Kamara up to fifth on the all-time goals scored list in the MLS. However, former Manchester United winger Nani scored his first-ever MLS goal in the 32nd minute, heading at the back post to cancel out Kamara’s opener.

Orlando’s Tesho Akindele double their lead in the 33rd and, after the break, Nicolas Mezquida scored the visitors’ equaliser in the 61 st minutes.

The game was far from over with three more goals in an exciting atmosphere at the Orlando City Stadium in front of 22,450 on a rainy night.

Cole Bassett curly home a left-footed beauty to make it 3-2 in the 71st for the Rapids. Orlando City’s Chris Mueller, who was subbed on, impressively slotted home in the 82nd, only for Nani to bag the eventual game-winner in the 89th minute on a penalty kick.

Below are the top-10 all-time goal leaders in MLS.

He moves past Ante Razov and now holds the fifth spot on the all-time @MLS list!! pic.twitter.com/WPm6gmLDrF