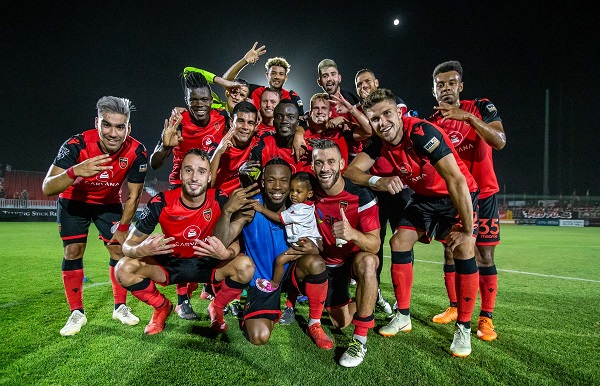 The Sierra Leone defender pictured in the middle kneeling in their celebration, was pleased with the result as the victory means they go top of the Western Conference.

Rising FC took the lead in the sixth minute on a moment of misfortune for Orange County defender Kevin Alston, whose attempt to clear a cross by Mustapha Dumbuya from the right ended up in his own net.

Two more goals from Joey Calistri and Solomon Asante in the 17th and 50th minutes respectively were enough for the host team.

After their victory, Dumbuya confirmed he was pleased to be part of the USL Championship side.

“The team has been playing well, we are getting points so, I am happy to be a part of the side,” he said.

Since joining the USL side, the former Partick Thistle and Falkirk defender has been a pivotal player for the club. He has played in ten matches over 800 minutes.

Rising FC matches a club record for consecutive wins after bagging its fifth straight in a 3-0 blanking of Orange County.#UpRising pic.twitter.com/QlNPbcO4LK