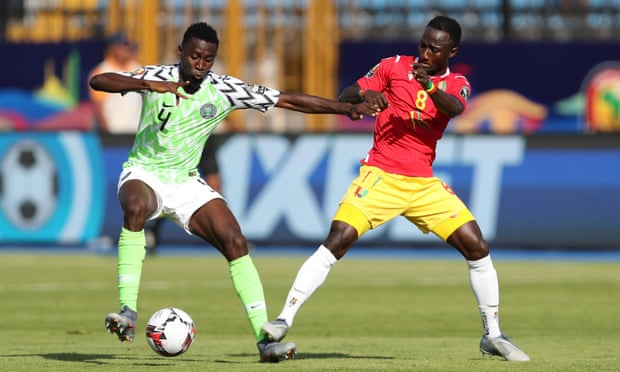 The Super Eagles of Nigeria become the first nation to advance to the knockout stage of the Africa Cup of Nations following a 1-0 win over Guinea Syli Nationale in Alexandria.

Kenneth Omeruo’s header in the 73rd minute was enough for the Eagles. As a result, Nigeria top of Group B with six points while Guinea will have to beat Burundi if they are to qualify.

It was the first full appearance in the tournament for Liverpool’s Naby Keïta since suffering an adductor injury in the first leg of the Champions League semi-final.

The coach, Gernot Rohr, made five changes, bringing Simon and Ahmed Musa in on the flanks. Levante’s Simon found Alex Iwobi with an inviting square pass after two minutes, but the Arsenal forward hesitated and the chance was lost.

Elsewhere, Uganda played 1-1 with Zimbabwe at the Cairo Stadium on Wednesday to move to four points after two games in Group A. The Uganda Cranes were impressive against DR Congo in their opening 2-0 win at Africa Cup of Nations.