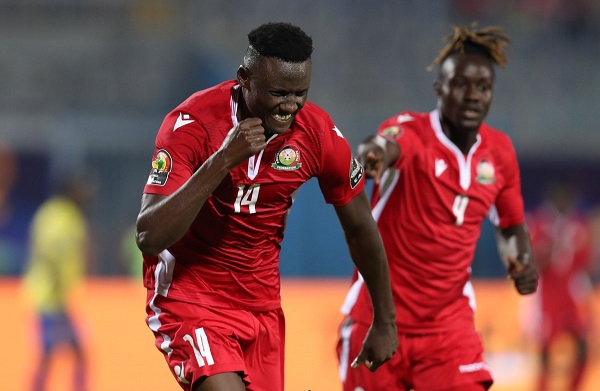 Kenya’s Harambee Stars restored their last sixteen hopes after a 3-2 win over neighbours Tanzania at the June 30th Stadium in Cairo on Thursday night.

Striker Michael Olunga scored twice in either half as resilient Kenya came from behind to secure maximum points ahead of the final round of group matches next Monday.

Saimon Msuva had given Tanzania a fifth-minute lead before Olunga level the scores in the 39th minute. Tanzania’s Mbawana Samatha restored their lead in the 40th minute making it 2-1 just before the break.

In the second half, Johannah Omollo brought Kenya level at 2-2 before match winner Olunga doubles his tally just after the hour mark in fine fashion.

The goal means Kenya’s lead for the first time in the match, getting on the end of a flowing move to beat the busy Tanzania goalkeeper Aishi Manula with a grass cutter.

In the day’s earlier kickoff, Algeria stunned one of the tournament favourite Senegal with a 1-0 win to reached the tournament last 16 joining Nigeria and hosts Egypt.

Kenya will face Senegal in a crucial qualification contest in their Group C final game. Both sides need a victory to be comfortable in reaching the last 16 of the competition.