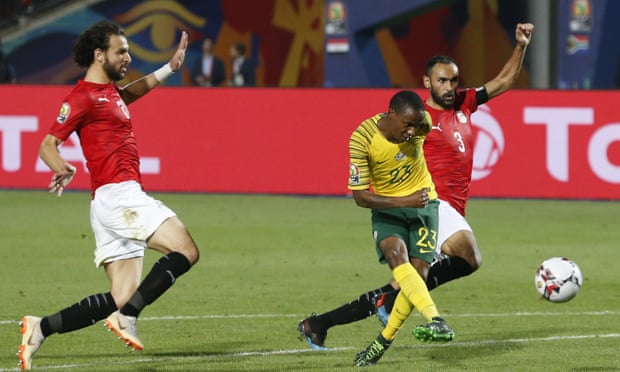 Thembinkosi Lorch scored the winner for South Africa in their well deserved late win over the tournament favourite Egypt in the Africa Cup of Nations.

His goal came following a counterattack with just five minutes to full time at the Cairo International Stadium.

Egypt was one of the favourites to win this year’s AFCON, but on the day Bafana Bafana was well up for the task despite they qualified for the last 16 as the lowest-ranked of the four third-placed teams.

Elsewhere, The Super Eagles of Nigeria eliminated holders and bitter rivals Cameroon, scoring twice in three minutes coming from behind to win a thrilling last-16 match 3-2.

Done and dusted.
Egypt players slump in disbelief after they were stunned by @BafanaBafana before a sell out crowd at Cairo International Stadium last night.
Bafana Bafana next meet Nigeria on 10 July. #AFCON2019 pic.twitter.com/xwomRATGWk