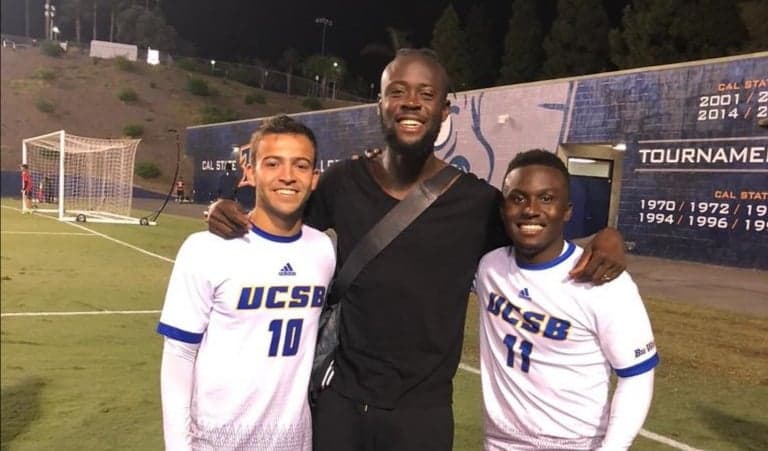 The date is Friday 15th November 2019 and it doesn’t come any bigger for the two young Sierra Leonean kids, who by fortune and with the help of The Craig Bellamy Foundation in Sierra Leone, (now closed down), and a Soccer Mum, Kelsey Sullivan, found themselves in faraway Santa Barbara, California, the USA, benefits from the generosity of Americans in their quest to support Africans seek greener pastures.

Several years ago, Rodney Michael Jnr and Sahid Conteh, on different dates and in different years, were among a group of Sierra Leone football (soccer) talents identified by the CBF technical staff led by Coach Johnny McKinstry, ex Leone Stars coach and current Coach of Uganda National team, and camped at the Tombo Complex.

In the years to follow about 17 potential super kids were beneficiaries of sporting and academic scholarships solicited by Kelsey Sullivan, a resident of Santa Barbara, from willing donors who saw it as their moral obligation to support a good cause and help the less privileged.

They were all admitted at the Dunn High School, Santa Barbara, California, one of the best private schools in the USA, and the reward is as the title reads “a date with destiny”.

Rodney and Sahid were awarded scholarships to University of California Santa Barbara after High School and became instant heroes of the UCSB SOCCER TEAM with consistent brilliant performances and proud ambassadors of their country Sierra Leone.

At 5 PM Eastern Time (10 pm GMT) on Friday the 15th November 2019, they have a “date with destiny” as their team UCSB will be hosted by Number 1 seeds, UC DAVIS in the BIGWEST CONFERENCE finals, with a place in the NCAA finals awaiting the winner.

The 2 proud young 20-year-old Sierra Leoneans will be the stars to watch after both made the Conference ALL TEAMS FIRST 11.

The occasion is massive with tens of thousands expected to witness what is the Bigwest Conference’s biggest match of the year.

Rodney Michael Jnr, who has already represented Sierra Leone under 20s on several occasions in official competitions, is also in contention as Most Valuable Player for both the BIGWEST CONFERENCE and NCAA.

The match can be viewed on https://bigwest.org/watch/default.aspx?Live=2385&path=uc_davis Time 5 PM Eastern Time (10pm GMT)

(Photo: Former Sierra Leone and MLS Legend Kei Kamara with Rodney and Sahid after one of their matches)