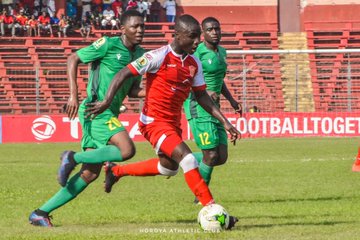 Morlaye Sylla scored the only goal in the first half ensured the host team continued to top the Group C with two victories and a draw as they step closer to the quarter-finals.

Elsewhere on Sunday, Pyramids accounted for their third straight wins out of three matches in Group A by defeating their Egyptian rivals Al Masry 2-1 in Alexandria.

Mauritanian side FC Nouadhibou held Nigerian outfit Enugu Rangers to a goalless draw at home in another Group A match game.

Morocco’s Berkane remain undefeated in Group B after they secured an impressive 3-0 victory over DR Congolese giants DC Motema Pembe at home.

Zambian giants Zanaco and Beninese side ESAE remained third and fourth respectively on the Group B standings after the two teams drew 0-0 in Porto-Novo.