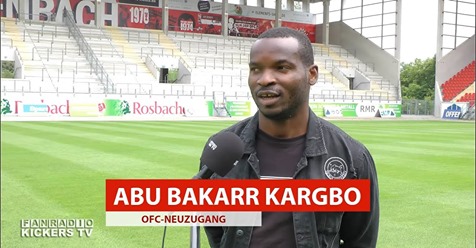 Regionalliga club Kickers Offenbach have confirmed the signing of former German U-19 striker Abu Bakarr Kargbo for an undisclosed fee.

The former German U-19 international last played for Berliner AK, where he scored over 30 goals in 57 appearances over two seasons.

In 2009, the striker, who was part of the Sierra Leone side against Iran, won the European U17 championship with the German national team, along with players such as Marc-André ter Stegen, and Mario Götze.

“I’m excited and ready to work my socks off. The club is a traditional club, and after positive talks, it was easy for me to sign the contract. I have a really good feeling, and I can’t wait to play in this beautiful stadium,” the former Hertha BSC II striker told FSL News.

“In addition to his very strong physique, Bakarr also brings quality and understanding of the game. We are pleased that despite numerous other applicants, he has signed for us.”

On 17 March 2018, Kargbo made his Sierra Leone national football team debut in a friendly 4–0 loss to Iran.