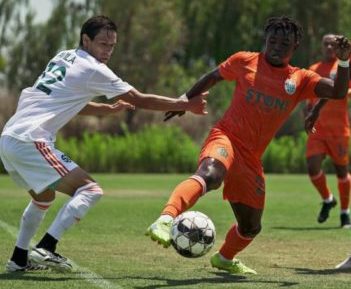 Donovan is the current manager of San Diego Loyal SC in the United Soccer League (USL) where the former Craig Bellamy Academy star has set his sight to flourish in the first team under the watchful eyes of the former international superstar.

“I remembered when coach Donovan told me that with my energy and hunger to break up play, win the ball and keep things simple, if I do that consistently, I would play a big part in his team. He also reminded me that is the same job the likes of Ngolo Kante, Ndidi and Torreira are doing for their clubs,” Samura told FSL news.

The midfielder was part of Friday’s pre-season match in their 2-2 draw against LA Galaxy 11 at the Dignity Health Sports Park.

Samura joined SD Loyal from Fresno, where he penned his first pro-contract last July after spells with Fresno FC U-23 in the USL PDL in 2018, and with National Premier Soccer League side Laredo Heat.

The San Diego, California-based club will kick start their campaign away from home next week Saturday against defending champions Real Monarchs at the Rio Tinto Stadium, and the Sierra Leone-born can’t wait to begin a new journey.

“I’m gearing to start the new season. I want to play and give my best to a great club under a great manager,” he said.

“Having London Donovan as a head coach right now is a blessing. I’m learning from him every day. Working under his supervision will surely help me to improve every aspect of my game,” Samura passionately added.

Samura hopes Coach Donovan will help him in his development process.

Beyond ready to start again. Our complete match schedule ⤵️