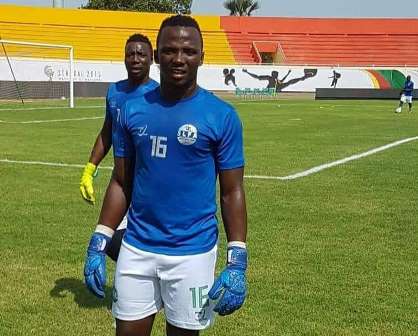 East End Lions first-choice keeper Mohamed Kamara has resumed full training programme with National home-based after recovering from a broken fibula that saw him out for eight months.

Kamara, who was the Leone Stars shot-stopper against Benin in matchday two of the African Cup of Nations qualifiers, missed the entire season due to the injury he suffered against Old Edwardians in December 2019.

The 21-year-old, who was forced to sit out the entire 2020 campaign, confirmed he is back ready for action.

“I am back to full fitness. I am presently training with the National team selected in preparation for Nigeria matches, ” Kamara told FSL News.

“I was pleased after I saw my name on the list of invited players called by Coach John Keister.’

Kamara added, “I want to thank God for his mercy. As a footballer never easy to faced with such a difficult moment just a month after you make your debut for my country.”

Earlier this month, he posted videos on social media, doing some simple goalkeeping exercises reassuring his fans of his comeback.

Kamara was part of the East End Lions 2019 unbeaten side but will have to prove his fitness if he is to make the final squad for Nigeria in November.