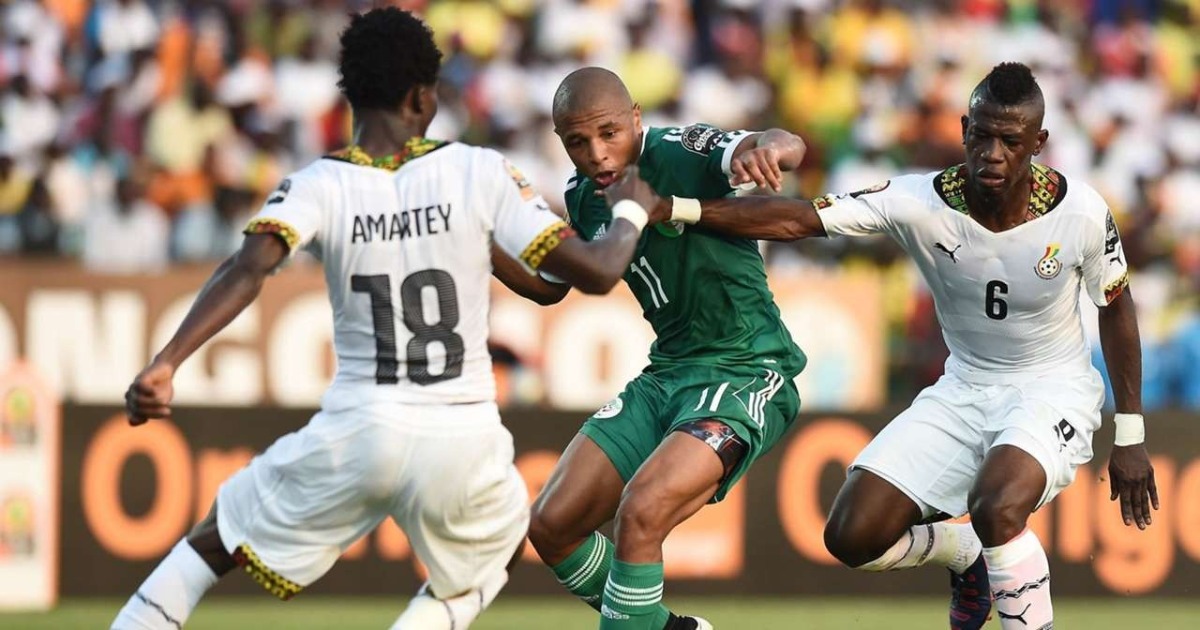 In their final warm-up friendly ahead of the upcoming 2021 Africa Cup of Nations, Algeria and Ghana go head to head at Qatar’s Education City Stadium in Doha Qatar on Wednesday.

The Greens head into the continental tournament as the reigning champions after seeing off Senegal 1-0 in 2019 final and will be looking to pick up their third title.

Seeking to become just the fourth nation to pick up successive Africa Cup of Nations titles, Algeria head into Cameroon, where the highly-anticipated continental tournament is scheduled to take place from January 9 through to February 6.

The North Africans, who first tasted glory in 1990, picked up their second AFCON title in 2019, where they cruised through the group stages, scoring six goals and conceding none, before seeing off Ivory Coast and Nigeria to set up a final showdown with Senegal, whom they narrowly defeated 1-0.

Djamel Belmadi‘s men also head into Cameroon as the reigning Arab Cup champions after securing a 2-0 win over fellow North African Tunisia in the finals courtesy of extra-time goals from Amir Saayoud and Yacine Brahimi at the Al Bayt Stadium on December 18.

Meanwhile, Ghana are pitted in Group C, where they kick off their campaign with a mouth-watering clash against Morocco on January 10 before squaring off against Gabon and Comoros, who are making their first-ever appearance at the tournament.

The Black Stars, who are one of the most successful sides in Africa, winning the Africa Cup of Nations title on four different occasions, head into this year’s edition aiming to end a 40-year title wait, dating back to their 1982 triumph, where they saw off host nation Libya on penalties after a 1-1 draw in normal time.

Since then, Ghana have made it to three different finals, losing on each occasion — twice on penalties — with the most recent coming back in 2015 when they were beaten on penalties following an uneventful 0-0 draw after 120 minutes.

Aiming to end this dry spell, the Ghana Football Association have appointed former manager and Serbian tactician Milovan Rajevac, who guided the nation to the Africa Nations Championship final in 2009, the AFCON final in 2010 and the quarter-finals of the 2010 World Cup.

The West African side are currently unbeaten in each of their last four games, claiming three wins and one draw in Group G of the World Cup qualifiers, where they sit at the summit of the table with 13 points from six games.

A number of players who lifted the 2021 Arab Cup title back in December have also been called up by the former Qatar national team manager, Yacine Brahimi, who scored three goals and created one in six games, and Al-Fateh midfielder Sofiane Bendebka.

Meanwhile, Ghana head to Cameroon with a promising 30-man squad, including the Premier League trio of Thomas Partey, Daniel Amartey and Jordan Ayew.

Five home-based players have also been rewarded with a place in the team following an impressive season in the Ghana Premier League, including David Abagna and Maxwell Abbey Quaye, who have been handed their debut call-up by Rajevac.

Ajax midfielder Mohammed Kudus is currently recuperating from a rib injury he sustained back in November’s 1-0 win over South Africa in Group E of the World Cup qualifiers.