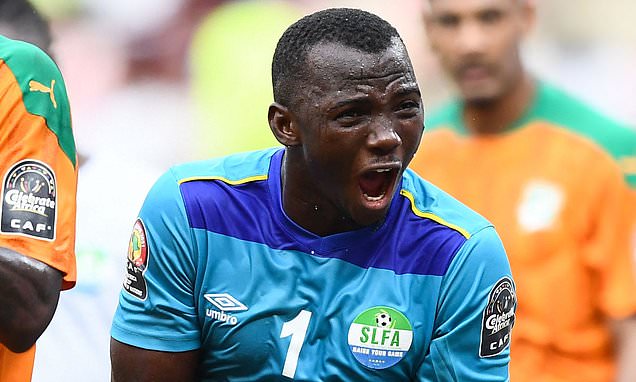 Sierra Leonean sensation of 2021 African Cup of Nation keeper Mohamed Kamara has signed up for Horoya Athletic Club on a two-year deal.

The twenty-time Guinean Champions have confirmed the news on their website.

“Mohamed Kamara, the goalkeeper, has signed up for Horoya Athletic Club for two years.

“Propelled to the forefront of the continental scene after his remarkable performances against Algeria (Man of the Match) and Côte d’Ivoire (Franck Kessié’s penalty save) during CAN 2021 in Cameroon. Mohamed Kamara was playing until then at the East End Lions FC, a Sierra Leonean club based in the capital Freetown,” the club said in a statement.

Kamara, 23, was named Man of the Match in Sierra Leone draw with Algeria on January 11 2022, at the Japoma Stadium, thanks to a brave display that saw him frustrate one of the tournament’s favourites.

He saved a vital spot-kick against the Ivory Coast that saw the Leone Stars rallied to a 2-2 draw at the Japoma Stadium.

He was named in the Sierra Leone sqaud for 2023 African Cup of Nation qualifying matches against Nigeria and Guinea-Bissau next month, the 9th and 13th, respectively.

Watch Kamara’s highlights against Algeria below!