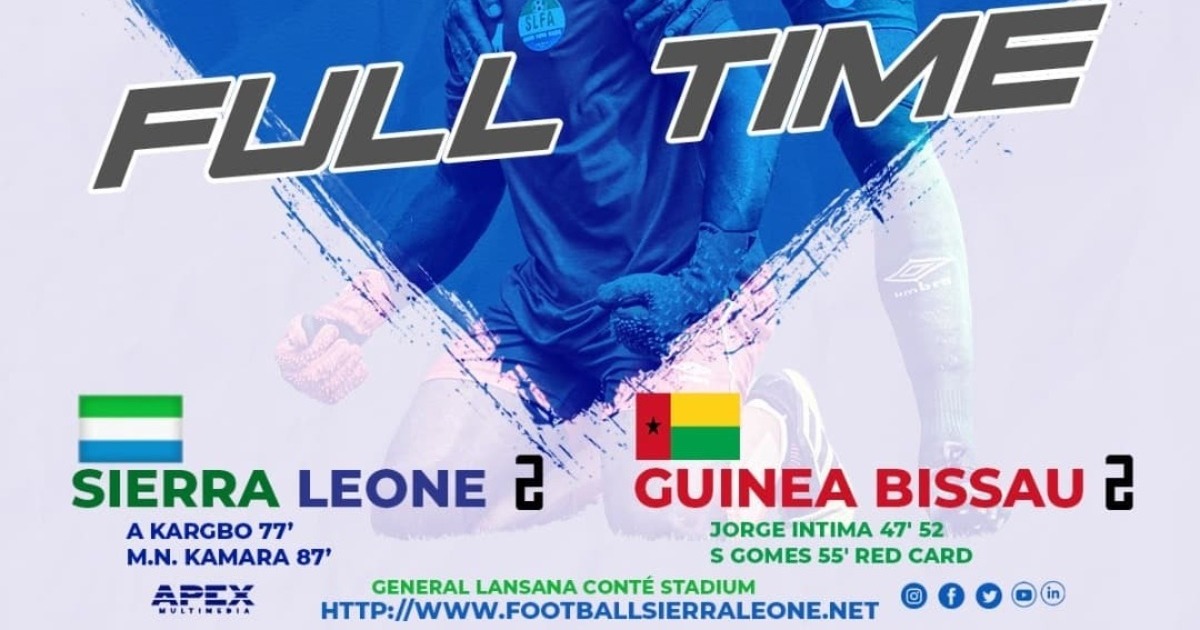 Sierra Leone staged a second-half comeback to share spoils with Guinea-Bissau in their matchday two 2023 Group A Africa Cup of Nations qualifier in the Guinean capital on Monday.

Both West African nations played to a 2-2 draw, and as a result, Sierra Leone placed third in the group after their two opening games.

The Leone Stars started well but wasted a couple of chances in their exchanges with Amadou Bakayoko, and Musa Kamara missed possible goal opportunities.

Coming into the tie after their 2-1 defeat to Nigeria, the Leone Stars were fully aware that it was a must-win to revive qualifying hopes, but the visitors stood firm to a goalless first half.

In the second half, two quick goals from the Djurtus through Jorge Fernando Barbosa Intima in the 47 and 52nd minutes, respectively – dismantled the host team.

In the 55th-min, Guinea-Bissau was reduced to 10 men as defender Zidane was sent off for a dangerous foul on Bolton Wanderers strike Amadou Bakayoko just outside the box.

In the 72nd minute, Sierra Leone missed a glorious opportunity to reduce the deficit from the spot when Substitute Augustus Kargbo was brought down, but Musa Noah Kamara missed the spot-kick.

Sierra Leone finally rallies a goal in the 77th minute after Augustus Kargbo dribbles his marker from the left wing to score a carpeted shot into the left-hand corner.

The home team completed their comeback through Musa Noah Kamara, who drew parity for the Leone Stars in the 88th-minute.

Sierra Leone coach John Keister made three changes to his side that lost in Nigeria on Thursday.

Guinea-Bissau will be guests to the Super Eagles for their third group game in September this year. Sierra Leone will go up against Sao Tome at home and away.

END_OF_DOCUMENT_TOKEN_TO_BE_REPLACED 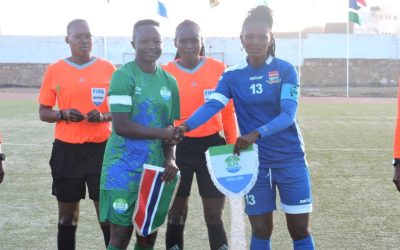 Sierra Leone's Sierra Queens suffered a heavy 4-1 defeat to the Gambians in their WAFU Zone A opener at the Estadio Municipal Marcelo Leito Sal, Cape Verde. in Cape Verde. Four goals by the Queen Scorpions Catherine Jatta placed the Gambia second in Group B Senegal...

END_OF_DOCUMENT_TOKEN_TO_BE_REPLACED 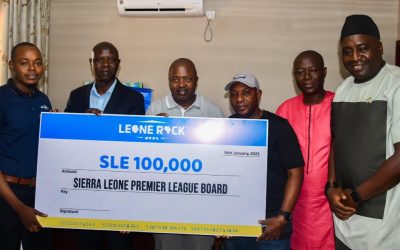 Sierra Leone mining company Leone Rock Metal Group (LRMG) are paving the way for a solid relationship with an approximately $5000 donation to the country's Premier League. It comes a day after their whipping gesture of NLE 300,000 (Three hundred thousand new Leones)...

END_OF_DOCUMENT_TOKEN_TO_BE_REPLACED 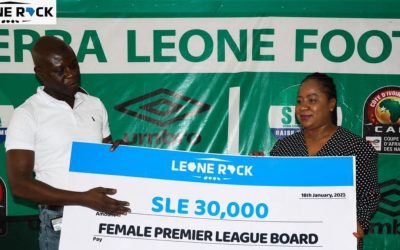 Ahead of the second phase of the Sierra Leone Women's Premier League, Leone Rock Metal Group on Wednesday donated a sum of 30 million old Leones to the female Premiere League Board in Freetown. Their gesture comes as a bid to showcase the camaraderie, leadership,...